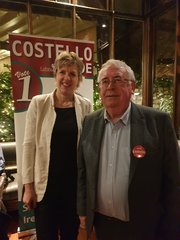 Speaking at his campaign launch in the Brian Boru, Hedigan’s Public House, Joe Costello said he was confident that he would be returned to Dáil Éireann as Dublin Central had increased from three to four seats, sitting TD Maureen O’Sullivan was not standing and the electorate is ready to vote out the present Government who have failed.

“The Labour Party has a strong set of policies and I have the experience and the track record of delivering results for the people of Dublin Central.

"It is time to get rid of this two-tiered hybrid Government - a contradiction in terms. Fine Gael in Government supported by Fianna Fáil in opposition has been a recipe for inertia.  No hard decisions were taken over the last four years while the big issues that affect people’s lives  have been piling up.

"We in the Labour Party have the policies and the capability to tackle all of the.

"Our Election Manifesto will contain a comprehensive programme to tackle the major issues neglected by the last Government and to build a fair and equal society.

"In the last analysis all politics is local.  All Labour’s priority issues will impact on the people of Dublin Central.  And there are major local issues that also need to be addressed.

"For example, this fine old historical landmark we are in tonight may not be here in five years’ time.  Metrolink proposes to demolish it to be replaced by a railway station.   The outcry at Metrolink’s proposed vandalism of the Na Fianna Grounds must be extended to the protection of the Brian Boru.  Similarly, BusConnects must treat communities with respect and not cut down trees and remove gardens while providing public transport and safe cycleways.

"Phibsborough, itself a wonderful village, with a vibrant community is stagnating because of the failure of Government to fund the development of Dalymount Park and because of the lack of co-operation (to put it mildly) of Tesco to engage in the regeneration of the Shopping Centre.

"We need strong leadership at local and national level to build an equal and sustainable society.  That is why it is important to vote for me in this election."